GFAF Event FAQ ~ Why We Do What We Do 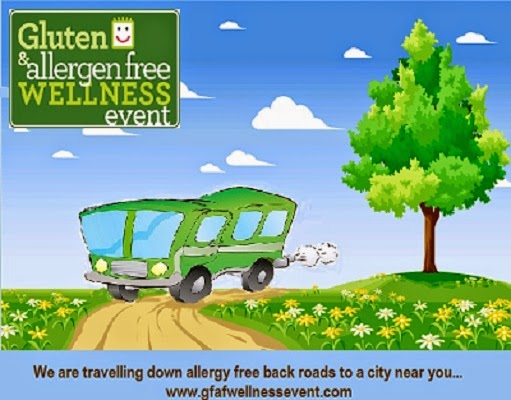 How do we choose an area?

There is quite a bit of research that takes place before an event is put together.
1. We receive an event request in a location either from a support group or company.
2. An assessment of potential demographic numbers are done based on population and community support.
3. If the event request was not made by a support group, then we contact them first.
4. An assessment of gluten/allergen free options locally available is done.

How do we choose the date?

As you probably know, there are way more events happening all over the country. We have to keep up with their schedule as well as plan our own about a year ahead. It can be extremely tricky when you add in variables like religious observances, holidays, and conflicting festivals/events already planned for an area. It can often times become impossible to avoid any conflict at all. In that case, we pick the lesser of evils and move forth making notes of changes to make in planning for the next year.

What motivates us to hold events in multiple locations?

To be honest, when we first went gluten free, we decided it would be great to have a large event that was affordable for families. Nikki could not afford to attend the national conferences as a single mother. So, our utmost goal is to be able to provide affordable events for families. We are about having quality over quantity.


What makes our events different?

Our vision has remained that a gluten/allergen free event should really be about health and wellness. That meant instead of having 50 bakeries represented, we would be selective and have only a few. Let's be honest, how many sweets can you eat in a day before you feel like losing your lunch? We decided rather than have 15 pizza vendors, we would have a couple, and if we could find healthy more savory options, we would try to include them. Being selective and caring about what types of food are offered makes us very different.

We added a few more important elements like focusing on local businesses and start ups that make our nation's economy stronger. Bringing people who are experts to educate and raising funds for charities that need support has remained a focus. The more supported charities, like research that already receives an outpouring of support from national resources, do not meet with our mission. Our largest donation to date has been to Camp Weekaneatit in Georgia, because it is a summer camp exclusively for children who medically need gluten free 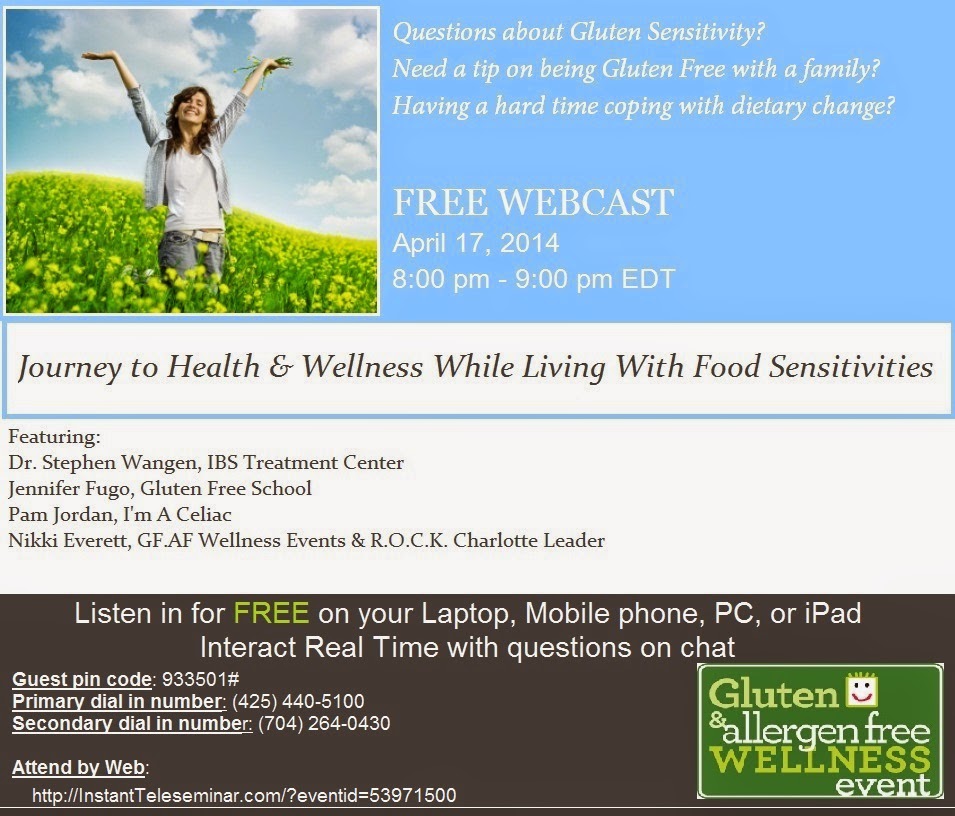 We also decided early on that "gluten removed" items would not be available at our events. If we would not feed it to our own family, we will not feed it to attendees. Remaining devoted to a safe environment is way more important to us than sponsorship.

Most importantly, rather than charge an already over-burdened segment of consumers who are already over-charged at every twist and turn, we felt it was important to offer as many Free perks as possible. You will never get charged $59.99 for a video series of speakers from a live event on our site. If we charge for any service or product it will merely be the cost to produce that item and nothing more.

Even the admission for an event goes to paying costs for that event to happen, not to make a huge profit . We don't believe that making a lot of money off illness is ethical whether you are an insurance company or an event company.


Hopefully that clears up a whole lot of questions you may have had. If you have any more, please contact Nikki Everett at gfafwellnessevent@gmail.com

In the last episode of Allergy Free Back Roads - Gluten Free High Country, we discussed eating out in a multitude of restaurants in Boone, NC. But we couldn't leave Boone without going to visit my friend Eustace Conway and friends at Turtle Island Preserve.

In meeting my goal to explore and get aquainted with the mountain culture, I had run across a video clip someone posted on Facebook about Eustace Conway on History Channel's Mountain Men who owns his own piece of wilderness near Boone in Triplett NC. At the time, this 1000 acre plot of heaven had just reopened after being shut down for a year by local government officials trying to make Eustace modernize his living arrangements.

I did some digging on the internet about the "modern day Daniel Boone", better known as, Eustace Conway, and found Turtle Island Preserve's FB page. There, I saw a post looking for volunteers to help out with summer camps on their 1000 acre wilderness spot. I sent in a response to their request for someone to cook with a detailed description of my gluten free knowledge. Fifteen minutes later, the phone rang and a woman on the other end asked to speak to me and excitedly talked about how Eustace's office manager had some sensitivities to gluten and that we could all learn from one another.


So I hung up the phone and excitedly said, "You want to have an adventure?"
Erin painfully reminded me of that comment over and over later. I was abnormally excited to try my hand at roughing it and being gluten free. The intern had explained that there would be a wood stove and pit fires for me to cook on as well as a handmade cobb oven. Somehow that all sounded romanticly Daniel Boone-ish, so I was sucked in immediately. 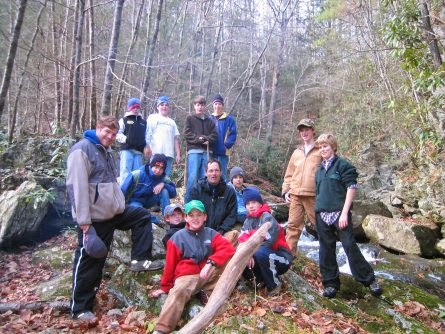 The drive into Turtle Island Preserve is like dropping into the depths of a wooded fortress cast back in time. The 800 ft of drive winds down and includes a considerably bumpy terrain as you slowly creep beside of the fresh mountain creek, steadily flowing down past rocks, making little waterfalls as you peer down at it over crops of mountain laurel. Four wheel drive is suggested. After getting out of the car at a parking lot made from just a leveled area beside the creek, we walked into base camp, another few hundred feet. 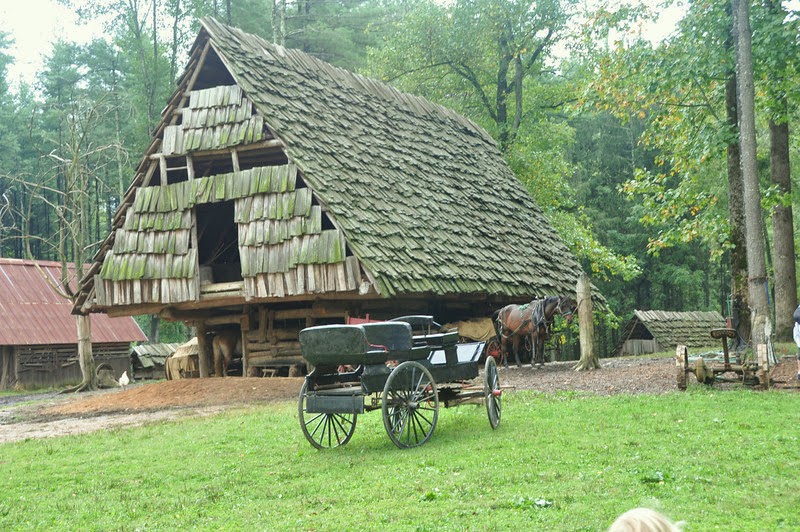 You start to glimpse primitive structures through the trees as you come into the camp area. Eustace, volunteers, and his interns have helped build structures using the timber, just as our ancestors did. I came to the kitchen area which sits in an island in between where the creek flows. This means you have to walk across a tiny bridge that looks as if Crusoe made it himself into an outdoor kitchen/dining hall with fireplaces, wood stoves, picnic tables, and the sound of the creek water flowing around you. 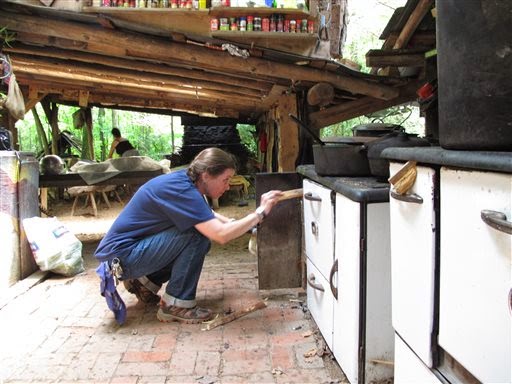 Yes, it is totally foreign to me too, at this point in my American spoiled life, to think of cooking under these circumstances and making it gluten free, but hey, it is possible right? I mean, we all talk a good game about having to struggle and boy, I was taking it on full force! I can do this though...yeah. We stoked fires, boiled water, and chopped wood, while Thai and I were thrown into a kitchen with a camper count (50), menu, supplies, and a time schedule.

On the menu for the day (write to me for recipes if needed at gfafwellnessevent@gmail.com):
Breakfast - 7 am
Scrambled eggs
Sausage Hash with rice, green peppers, red peppers, onions, and cayenne
Reg. & Gluten Free Toast
Sliced fresh fruit 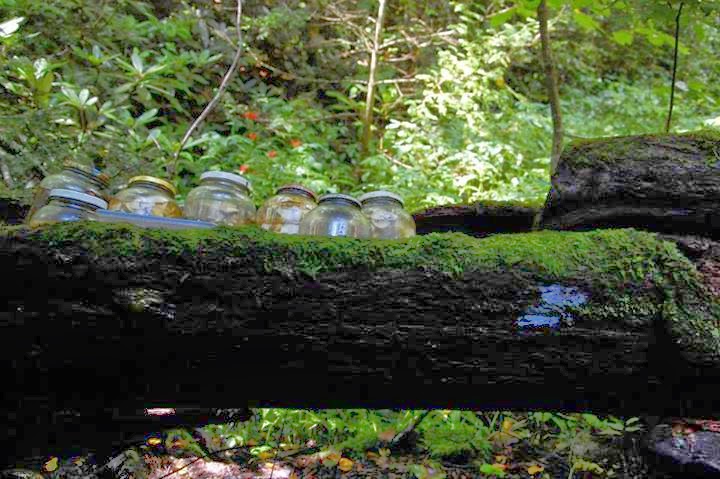 A "Mountain Cooler" is a hollow log with cold mountain creek water running through it used to store milk turning into yoghurt, fresh pickles, tea, watermelons, anything you want to keep cool.

After 12 hours in the heat (and man, does it get hot working wood stoves in the summer), covered in sweat and soot, we crawled into the SUV and headed back up the mountain and home. I remember falling out of the car Erin said in a falsetto voice, "You want to have an adventure?"
I grumbled something obscene and hobbled into the house to sleep it off.

The next day we made our famous Gluten free pizza, which they scoffed with delight, and we caught Eustace picking the last of it off the platter. For a couple of days a week, I volunteered while summer camps continued. My kid went with me, helping to feed the animals, pick the Kale, and play her mandolin to Eustace at meal times. He likes the Old Time Bluegrass she is learning. 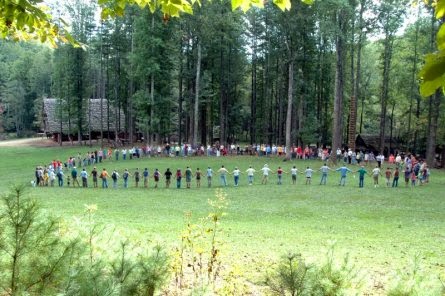 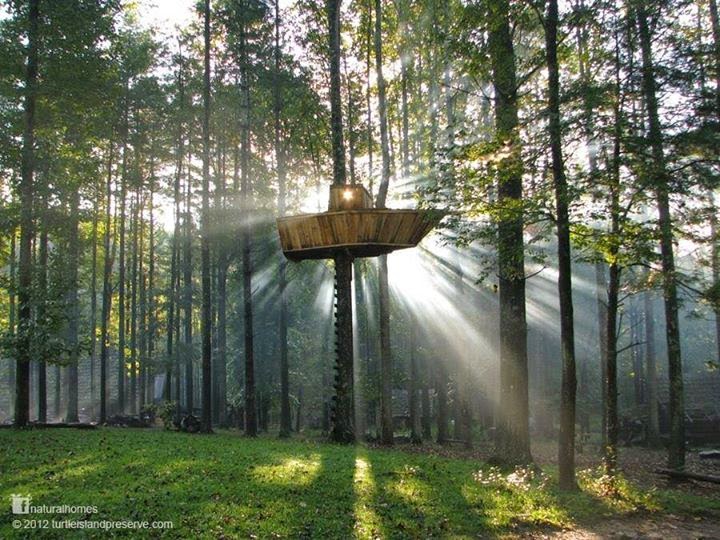 If you are a fan of History Channel's Mountain Men, you may wonder if Eustace Conway is as nice as he seems or if he is genuine...
He is.
Eustace has Southern charm and intelligence combined with the resolve of having a mission, which makes him very cool to know. But more importantly, I believe in his right to preserve the knowledge and ways of the people of this great country. To me, he is a patriot in every sense of the word. 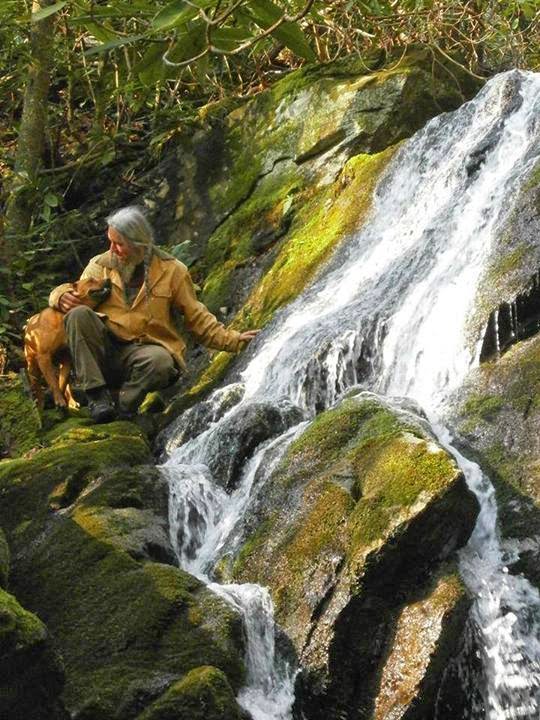 My fave pic of Eustace and Savannah

I can't say that they have learned near as much from me, as I learned from them. I know I can start a fire and cook under the most extreme conditions now (yes, even in a storm and a flood) I know I can successfully be gluten free in the woods with no power, and I admit it makes me feel darn good!! There is a certain sense of empowerment to know you can survive, if need be, on your own without an Outback or P.F. Chang's.

For about 6 months I was the main volunteer running Eustace's Twitter, since they have no fast internet nor power. Appalachian State University students have helped him with hydropower for his saw and solar power for his office only. I have also helped them guide some students of ASU in a non-profit class on event planning. So, I guess I finally paid Eustace back for the amazing experience I had at Turtle Island Preserve after all.

If you would like to donate to their cause of teaching history to our children and the importance of our relationship with nature, please visit their web site.
TURTLE ISLAND PRESERVE

That's all for now - Come back again for more crazy adventures with me on Allergy Free Back Roads!
~Nikki

** If you want to read more about Eustace and his vision of Turtle Island, read The Last American Man by Elizabeth Gilbert 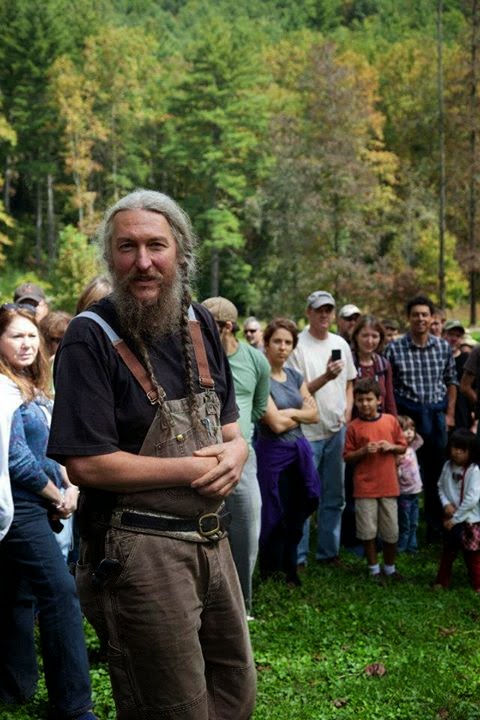 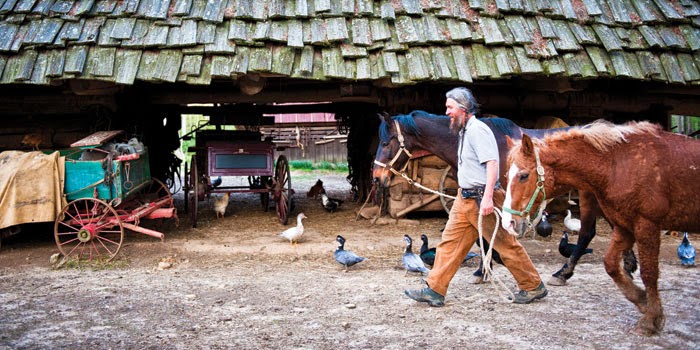 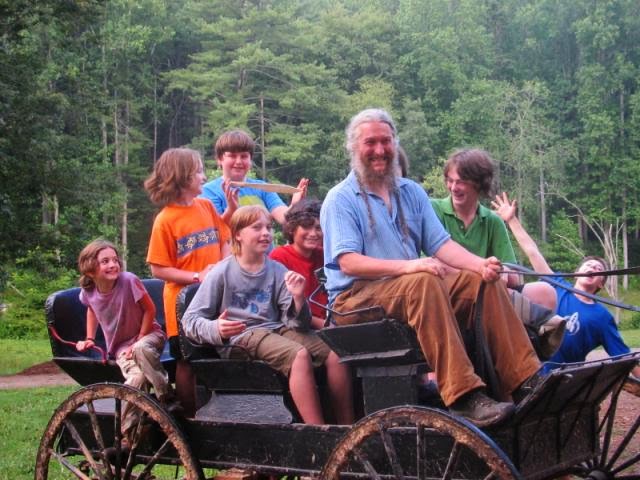 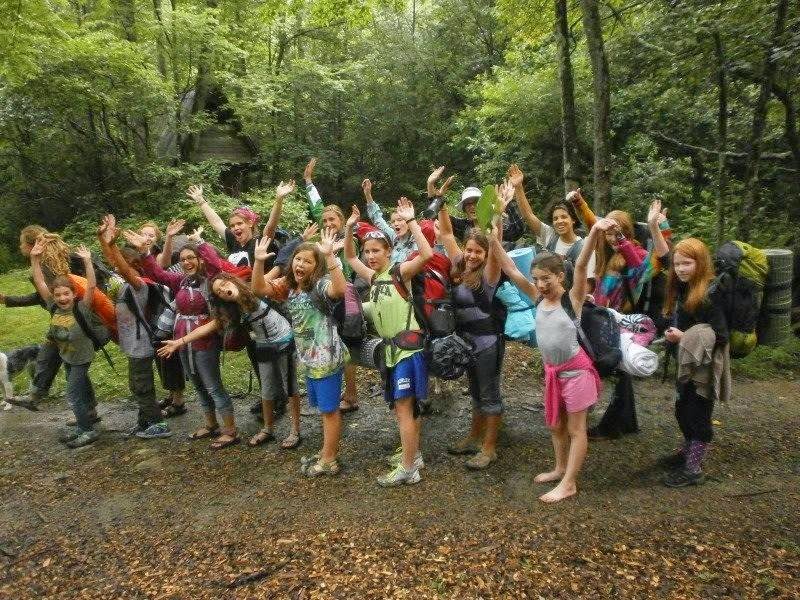 “I went to the woods because I wished to live deliberately, to confront only the essential facts of life, and see if I could not learn what it had to teach, and not, when I came to die, discover that I had not lived. I did not wish to live what was not life, living is so dear; nor did I wish to practice resignation, unless it was quite necessary. I wanted to live deep and suck out all the marrow of life, to live so sturdily and Spartan-like as to put to rout all that was not life, to cut a broad swath and shave close, to drive life into a corner, and reduce it to its lowest terms.” ~ Henry David Thoreau