It's not always about gluten and allergen free food here on Allergy Free Back Roads.There are a whole lot of things that can happen when you travel. When we last parted, I had left Loretta Lynn's Ranch and was back on the road to Little Rock  to set up and meet with local vendors. The stormy gray sky put out a few showers as I traversed through the western part of Tennessee and passed through Memphis, stopping long enough to get a cup of java and stretch my legs.

This road trip started to remind me again of my precious child. We had made the same trip in reverse two summers ago. After we had journeyed to Butcher Hollow, we drove through Kentucky stopping at Lexington, then Louisville to visit Churchill Downs, home of the Kentucky Derby. We ate at a Jason's Deli in Louisville and headed back on the road. We stopped for an afternoon in Hannibal, MO to visit Mark Twain's Boyhood Home & Museum. Each stop had some sort of interesting side trip for Doodlebug to learn from and explore. 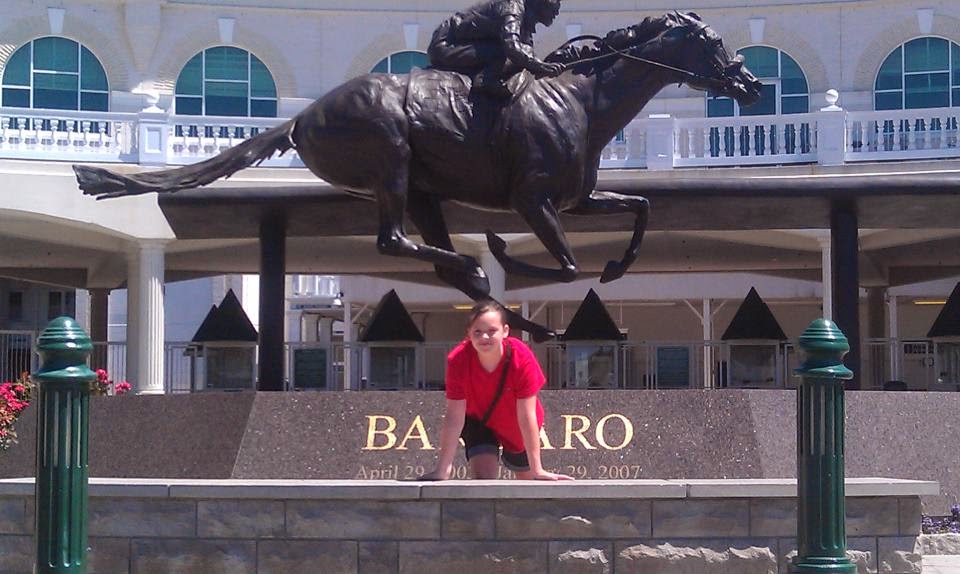 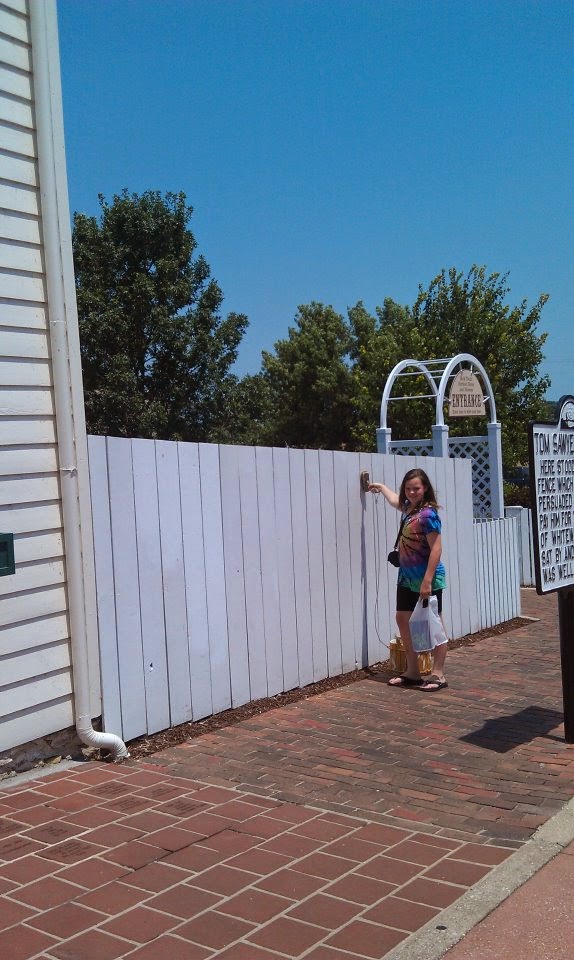 Yes, I absolutely made her do the paint brush on the fence in
Hannibal - hehe what are mothers for?


We went on up to Omaha, seeing people and meeting vendors before starting the trek back down through the middle of the country, heading ever South to New Orleans. There was a mission I had to accomplish in Vicksburg Mississippi, which is really why I wrote this story down on a Memorial Day weekend.

We stopped in Memphis to do the Sun Studio tour. Doodle has been a fan of Elvis Presley since she was old enough to sing along, but his home was like an amusement park and I knew what she really wanted to do was hear his music. If you are ever going through Memphis,stop in and pay the $13 to do the tour. It is by far one of the coolest tours I have ever done of a historical landmark, filled with the music of Jerry Lee Lewis, Elvis Presley, and Johnny Cash. All three recorded hits there and it is known as the birthplace of rock and roll. The soda shop has fantastic root beer floats (gluten free of course) you can sip as you sit on the very bar stools that Jerry Lee and the King, Elvis, sat on many moons ago. 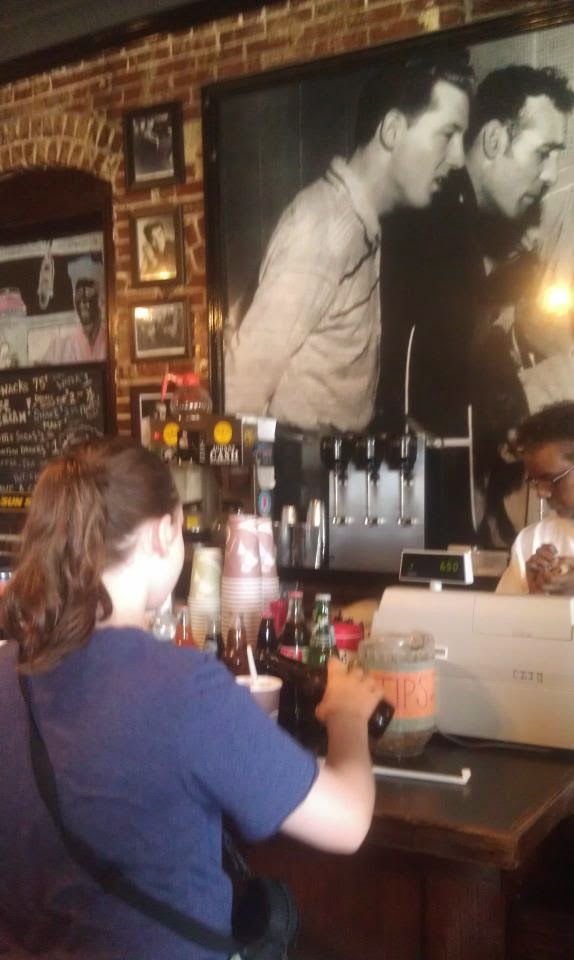 Having a root beer float before the tour - The barstools are embroidered
with the names Elvis, Johnny, and Jerry Lee in their favorite seats

After Memphis, we traveled on to Vicksburg, Mississippi. It's not really on the way to New Orleans, but this was a special mission. You see, my Great-Great Grandfather fought in the Civil War as a Confederate and was captured by the Union soldiers at the Battle of Vicksburg on July 4th, 1863. They kept him a prisoner for almost a year and set him free during an exchange of prisoners. His Union issued blanket had been passed down through the generations to me. However, I just couldn't see keeping it in my possession and felt it would be better suited in a museum. 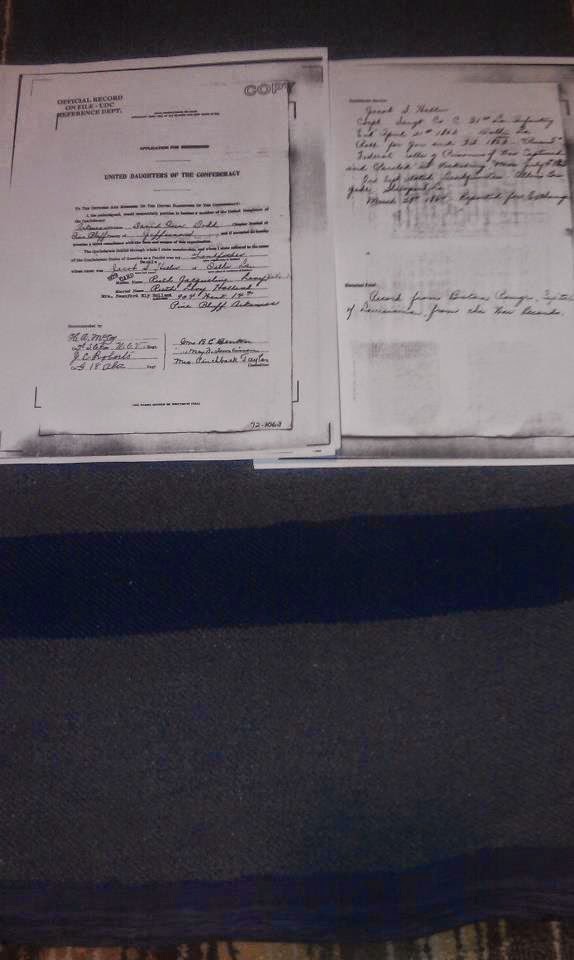 Well, the Old Depot Museum in Vicksburg had been emailed and I had sent the Director a formal request to donate the blanket. We arrived on July 3rd and the Director, Lamar Roberts, met us at the door. I handed the blanket to him and I could see his eyes grow larger as he fingered the blanket folds inspecting the hand made stitching. He looked up and said, "I'm going to call the newspaper."
Doodle and I hung out in the coolness of the air-conditioning and waited on the reporter to arrive. Lamar excitedly chatted to us that he had found the area on the battleground map where my relative was captured. The following article was written and Doodlebug and I graced the front of the Vicksburg Post the next morning for July 4th.

When Confederate Sgt. Jacob Senile Heller was captured at Vicksburg July 4, 1863, by Union troops, he was given a choice: sign an oath that he would not continue to fight and be paroled to go home, or be taken as a prisoner of war.

A Union-issued blanket passed down by Heller to family members is the only clue to what Heller decided.

Monday, that blanket found a permanent home in Vicksburg thanks to Holland’s great-great-granddaughter, Nikki Holland Everett, a North Carolina resident.

“We knew he had been captured here,” said Charlotte native Everett, standing with her 11-year-old daughter in the Old Depot Museum, where the treasure will now reside. “The blanket has been in the family for all this time. It was packed away in an attic.”

Everett researched various Vicksburg spots that could be a good home for the family treasure, finally settling on the newly opened museum in the Yazoo & Mississippi Valley Railroad station on Levee Street.

“They needed donations. They had that on their website. When I read that, I thought, ‘that’s where it ought to go,’” Everett said.

Her father, B. Lee Holland of Huntersville, N.C., said he is delighted with Everett’s decision. As a boy, he often visited his aunt and her husband, Jewel and Albert Grego, who lived at 2421 Drummond St., and has fond memories of the city.

“To me it’s appropriate because he was captured there,” said Holland, 75, reached by phone Tuesday. “It’s like it’s gone home.”

Holland said he was in the city visiting his aunt on July 4, 1947, when then-Gen. Dwight D. Eisenhower came for a military parade. “There was a huge celebration, which we went downtown to see,” he said.

Old Depot Museum Director Lamar Roberts said the family contacted him a few weeks ago about donating the blanket. Seeing it Monday, Roberts said the sturdy weave of the wool cloth and the hand-stitching on its binding testify to its age.

“I’m surprised to see the excellent condition,” said a broadly smiling Roberts, clearly tickled to have it. He plans to set aside an area where it, historic letters and other artifacts can be viewed but not jeopardized by handling.

Heller was a native of Bohemia, in an area that was then part of Austria, said Holland. He was 21 when he came to the United States in 1854, eventually settling in Delhi, about 40 miles west of Vicksburg.

“We know he worked in a general store before he got married, and he imported the lady who became his wife,” Holland said.

Heller enlisted in the Confederate States Army on April 21, 1862, and eventually was assigned to Company C of the 31st Louisiana infantry.

The 31st saw action at Milliken’s Bend and Chickasaw Bayou in 1862, and wintered quietly in Vicksburg, “doing picket duty and drilling,” before being sent in May 1863 to Port Gibson “as (Union General U.S.) Grant’s campaign against Vicksburg began in earnest,” according to “A Brief History of the 31st Louisiana Infantry,” by Kelly Shockley.

The regiment defended against Grant’s Vicksburg Campaign at Jackson, the Big Black River and Vicksburg. Its members helped repulse Grant’s May 22 assault, Shockley wrote, and was a part of the Confederate force that surrendered July 4 after the 47-day siege.

“Each Confederate soldier was forced to sign an oath, saying they would no longer fight, and were then paroled,” he added. “Those refusing to sign remained as prisoners.”

Holland said the family history does not explicitly state that Heller refused to sign the oath, but in addition to having the Union blanket it’s known that he was part of a prisoner exchange to Allen’s Brigade in Shreveport, La., March 29, 1864, and Heller’s daughter, Eunice Heller Levy, Holland’s grandmother, always told family members he said the blanket was given to him when he was a prisoner.

“From my grandmother speaking about him and the kind of man he was, she said he was a very determined individual with very strong feelings about his family, his country, about doing the right thing, and it was one of the reasons he joined the army,” Holland said.

After the war, Heller and his wife, Babette, eventually settled in Bastrop. The 1900 census lists nine daughters born to the couple. Two other children were stillborn, according to family records Holland sent to Roberts to authenticate the donation.

“We hold a very special place in our hearts for Vicksburg,” Holland wrote to Roberts. “My aunt took me to the battlefield on holidays and other occasions, and it was very much a large part of my fondest memories of growing up. I can think of no better resting place for the blanket than to be a part of Vicksburg history for others to enjoy and reflect upon.”

Someone wrote into the paper after seeing the article:

Enjoyed your article and decided to do some researching on Heller on Ancestry.com and Fold3.com. I found on Fold3 that he did sign the Oath after the surrender at Vicksburg (see attached). There are 12 pages of documents on Fold3.com that contain his CSA records. He appears to have been captured at Milliken's Bend and exchanged during the Vicksburg Campaign. His wife also filed for a CSA pension in Arkansas (also see attached) found on Ancestry. If you would like me to send you or to Holland-Everett family this info let me know and provide me contact info. I am a member of the local Sons of Confederate Veterans (SCV), General John C. Pemberton Camp 1354. This has been pleasure.

Oath of Surrender at Vicksburg

I smiled as I drove through Memphis and in a couple hours time I was in Arkansas, the terrain returned to the flatness I had remembered. Nothing but farmland and wet fields greeted me as the stormy skies rained down on my car. 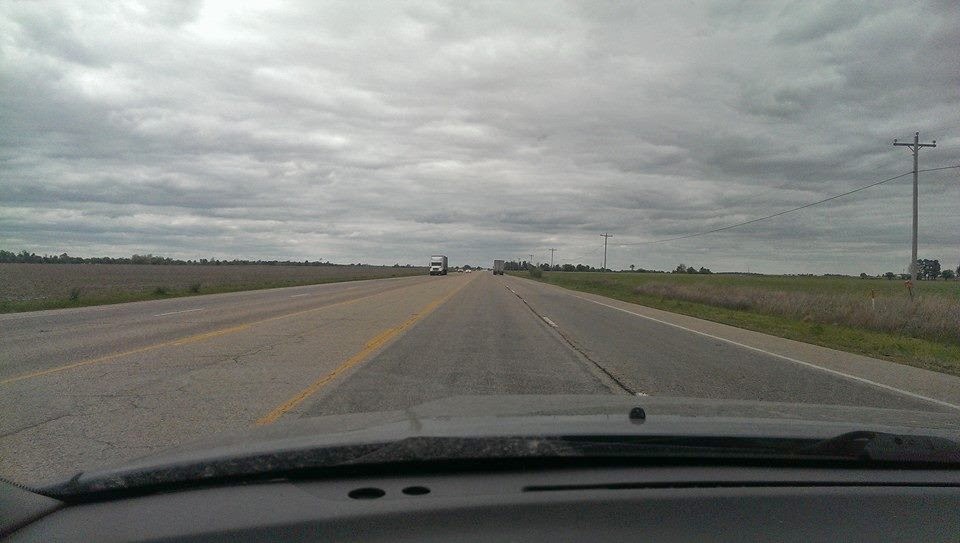 Join us next time on Allergy Free Back Roads as I stop in Little Rock at the same time an EF4 touches down, experience the tastes of Little Rock and then onto St. Louis...

Did you know? Rocket 88 was recorded at Sun Studio and is given the distinction of being the birth of Rock'n'Roll